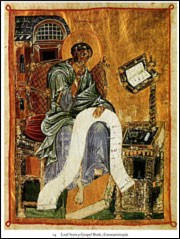 The Medieval and Early Modern Studies Program at Davis offers undergraduate students with interests in the period 400-1750 CE the opportunity to take courses across a range of disciplines, with an emphasis on Europe but attention to other world cultures during that time.

Students can major, minor, or simply take core classes offered by the program itself, as well as choosing from relevant classes in a variety of departments and disciplines. The program also coordinates with the Medieval Research Consortium and the Early Modern Studies Cluster, two groups that invite speakers to campus and hold other events of interest to medievalists and early modernists. We welcome inquiries about the Program and its affiliated groups; please contact Staff Advisor Brandy Fleming or the Director, Professor Tiffany Werth.

The era from the fall of Rome to the end of the Baroque Era witnessed the rise of the intellectual, political, and cultural forces that shape modern western society and forms a bridge between the ancient civilizations of Greece, Rome, and the Middle East and modern times. This period also saw the great civilizations of feudal Japan and classical China in East Asia, of the Inca and the Maya in the Americas, and of the Mughal Empire in India, among others; Medieval and Early Modern Studies aims to offer a view of the richness of these worldwide cultures and their interactions during a period of tremendous exchange, both confrontational and cooperative.

Why should you study the medieval and early modern period?
Are you interested in history, political science, music, literature, philosophy, art, theater, religion, economics, classics, law, architecture, science, medicine, or biology? The interdisciplinary major in Medieval and Early Modern Studies (MEMS) provides you the opportunity to study all of these during one of the most exciting, creative, and turbulent periods in history.

In Europe, Byzantium, and the Middle East, the genesis of many modern social institutions—from universities to legal systems to capitalist economies—can be traced to the medieval and early modern period; many concepts we may take for granted in everyday life, such as the use of Arabic numerals, widespread literacy, and consensual marriage, also arose in this era. It was an age characterized by deep religious faith and creativity among followers of Islam, Judaism, and Christianity; by the searching philosophical and religious explorations of figures like St. Augustine, Moses Maimonides, and Averroes; and by the rise of vernacular, national languages that gave poets like Dante Alighieri, Wolfram von Eschenbach, and Geoffrey Chaucer a new impetus for their literary creations.

Such cataclysmic events as the Crusades, the Black Death, and the Hundred Years’ War, as well as ongoing shifts in class structures, agricultural production, religious organizations and military technology made this a tempestuous time in which to live, one not unlike our own in its complexity and vitality. Study of this remarkable period provides a unique vantage point as we approach the conflicts and challenges of our modern world.